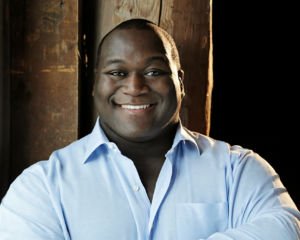 Reginald (“Reggie”) Smith, Jr.’s booming baritone voice and commanding stage presence have earned him roles with major opera companies and accolades from music critics, including Opera News, which hailed him as “one of the most exciting baritone sounds to come along in years.” Such prodigious success would prompt many singers to set their sights on a career on opera’s biggest stages. And while Reggie appreciates and accepts those opportunities, his true passion is teaching.

“I went to school for vocal performance and choral education,” he explains, of the two Bachelors in Music degrees he earned in both Vocal Performance and Choral Education (K-12) from the University of Kentucky. “It bothers me when singers refer to teaching as their ‘fall-back.’ It’s not my fall-back, it’s my goal! I want to someday teach at the high school level. I love working with young people.”

For now, however, Reggie’s “electric, hall-filling” (The Baltimore Sun) voice is too in-demand to be committed to a classroom. Still, that doesn’t stop him from giving back to young people when he can. When he is performing with an opera company, he will find out about its educational outreach programs and ask to go into the schools to talk to students, provide master classes and question-and-answer sessions.

“I believe that even if the kids aren’t going to become performers or go to school for music, they still benefit from seeing the opportunities available to them. This is especially true for underprivileged students; to see a young black person doing what I’m doing with music—for many kids, that’s eye-opening.”

Even Reggie wasn’t always sure that he would be able to take advantage of those opportunities. As the youngest of five children, Reggie’s family had to stretch their dollars, so there was not always money for extra things.

“That’s where having scholarships enabled me to go to school, to have the extra money and to not have to work a lot of extra jobs. It allowed me to focus solely on my studies,” says Reggie. “That is something I consider an honor, privilege and a blessing. I always give special thanks to the Schmidt Foundation.”

Reggie was awarded a vocal scholarship from the William E. Schmidt Foundation’s leaders in the early, formative stage of the Schmidt Vocal Competition, before it was the nationwide program that it is today. Their faith in him was warranted, as he went on to become the Grand Finals winner of the 2015 Metropolitan Opera National Council Auditions, which is considered by many to be one of opera world’s ultimate awards.

“Winning the MET was a huge part of my career and a huge turning point for sure. That definitely puts you on the map. All of a sudden people know who you are,” Reggie shares.

Still, Reggie retains his humble and grateful approach to life, even after winning such an esteemed prize.

“I just try to do the job in front of me. Then when I look back I can say, ‘Wow, I enjoyed every bit of this!’,” he explains. “Whether I’m performing in on the stage in Hong Kong or Huntsville, Alabama, I strive to enjoy each experience to the fullest. If there’s anything to be proud of it is being appreciative and absorbing all the experiences and opportunities afforded to me.”

He also never forgot the people he met early in his career who have helped him get where he is today.

“At the Schmidt Vocal Competition, I hung out with several singers with whom I still stay in touch to this day. I have big brothers and sisters in the business, and we’re always taking care of each other. That’s just the community and communal atmosphere of the vocal arts,” says Reggie. “I always give thanks to those who have supported me. I would not have been able to do this by myself.”