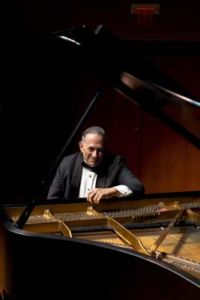 Dr. Robert Sharon has studied under such world-famous pianists as including Mitchell Andrews, Jane Carlson, Mieczyslaw Munz and Artur Balsam. He received his B.S. and M.S. degrees in Piano from The Juilliard School and his Ph.D. in Performance from New York University and The Manhattan School of Music. Dr. Sharon has been featured performer in Carnegie, Avery Fisher, Merkin, Tully and Town Halls and The Kravis Center, Broward Center and Gusman Hall and many venues throughout the world.  He has been soloist with The New York Philharmonic, The Philadelphia Symphony Orchestra, The Florida Philharmonic and The Palm Beach Opera Orchestra. He has won critical acclaim in chamber music and as accompanist and coach, having worked with such luminaries as Abraham Kaplan, Jennie Tourel, Samuel Sanders, Willard White, Itzhak Perlman, Andre Thomas, James Conlon, Dr. Jo-Michael Scheibe, James Judd, Philippe Entremont, Leona Mitchell, Marilyn Mims and Virginia Zeani. Currently, he is on the Music faculty of Palm Beach Atlantic University and is Founder and Artistic Director of The Robert Sharon Chorale, a community chorus in West Palm Beach.