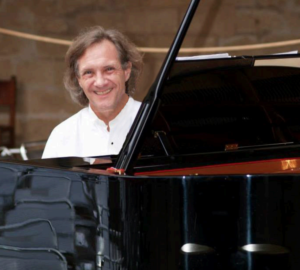 Tedrin Blair Lindsay was raised in Rome, Italy, and has been a professional pianist since the age of ten. He performs over 150 programs annually, boasting a huge repertoire of vocal and instrumental chamber works, and his own virtuosic compositions for piano, voices, and orchestra, with two solo CDs currently available. His international career has included prominent performances at Carnegie Hall, Avery Fisher Hall, Kennedy Center, the Bilbao Music Festival in Spain, and the Folles Journees Festival in France. Dr. Lindsay serves as vocal coach, musical director, and musicologist on the faculty of UK Opera Theatre, with credits including Show Boat and Silent Night in 2018, and a star turn for the last two decades in the annual pops concert Grand Night. His recent productions with UK Theatre and Dance have included musical direction for Little Shop of Horrors and Peter and the Starcatcher, in which he also performed the role of Captain Scott. Dr. Lindsay has also been affiliated onstage and off with AthensWest Theatre Company in Lexington, Kentucky and Lamb’s Theatre Company in New York City, and performs extensively as pianist with the American Spiritual Ensemble and the Alltech Corporation. Additionally, he is a sought-after speaker and writer on a wide variety of topics in arts and letters.